Reflections on The Brotherhood and Free Speech

I took the horde on a tour of The Prydwen.

The people there snark about Hancock continuously, and refer to him as "it" - they seem to hate him more than the synth Valentine. And they just ignored Strong.

The irony is that Curie - the embodiment of everything they hate - wants to work with them to progress science.

Synths and ghouls are just people, no better or worse. You never get an option of bringing that up with any of the factions in this game.

Wandering about the Prydwen as a part of the Brotherhood - I'm struck by how narrow-minded and xenophobic they are.


For example, one of the scribes regards all books that don't have a military application as a waste of paper, and sees weeding out those works as his duty.
I think he literally burns them.
The medical officer is obsessed whether or not people have had sexual contact with ghouls - not because that would cause a medical problem, but because if they have, they are unfit for the Brotherhood.
Substitute "Jew" and you have behaviour that would be perfectly normal for a doctor of the Third Reich.
I also found the dialogue options frustrating.
You cannot raise any questions, you cannot talk to them unless you are a part of the Brotherhood - even though you command an army and really they should be trying for either diplomacy or war with you.

You cannot dissent in the dialogue choices, in fact it's pretty much less of an option than it is when dealing with the Institute.

No, sweety, you obviously can't handle yourself - the army of gunners and a courser I slaughtered on my way to you are proof of that.

The strength of the factions comes from the fact that they aren't working as individuals.

The Minutemen alone are just wastelanders - and their bodies line the wastes.


When they work together, they are an army stronger than the BoS or the Institute - and they are quite capable of co-operating with the Railroad, intelligent ghouls, free synths, and even the occasional Super-Mutant like Strong - who doesn't seem to be that unusual if you look at the game lore or even how calm people are about his presence.


But I can't say any of that to her, because the voice acting is too expensive, and if a mod was created, assuming the Creation Kit is ever released and a willing modder spends the time, the engine requires voice over the text. The software fights anyone who wants to jump of the rigid tracks the game lays out. And that's jarring.

I am standing here with almost all the companions. I would expect Hancock to offer her a place in Goodneighbour or at least a few words of sympathy. Deacon would want to help her - Danse to shoot her in the head as an abomination unto Maxson.

I can't say or do anything but passively watch as she walks away, and yet here I am with incredible firepower and persuasiveness and a desperate need for the information she has about the Institute.

I should be able to intimidate her, seduce her, bribe her, recruit her, abduct her, arrest her.

I just don't feel able to roleplay in this game.

I get it, that with the use of voice acting, they have to limit the path any conversation can take, to provide the 'Cinematic' experience - you are pretty much along for the ride while they travel down the train tracks.
Now, don't get me wrong - I love the voices of characters like Valentine. But I do think voice should be used sparingly.. for one thing, hearing the same complaints from companions over and over drives players bonkers.
But it gives me a craving for a deeper game - one where you can make real choices, persuade people that they are heading down the wrong path, encourage those who have potential to think beyond the propaganda...

There's no reason I can't encourage those organisations to change, by influencing enough of it's members, except that the reliance on voice acting takes away all the flexibility.
Shawn and Maxson are parallel people. Both are isolated from contact with outsiders. They are both terrible leaders, imo. Rigid and ignorant, and followed unquestioningly rather than dealing with dissent and the intellectual growth that encourages.

It's possible Maxson is just a puppet leader in any case, and that he could be talked into cutting the strings. After all, Sarah Lyons worked with a wastelander who had a super-mutant as a part of their team - despite being opposed to all of that. Then she died rather quickly - I have to wonder if she was shot in the back by those now in power. Maybe exposing that could encourage Maxson to question the cabal controlling him.

But going back to the Free Speech issue...

If the only words you hear are those you agree with, how do you know you are right? Maybe some better way of looking at things exist and you never hear of it.

In both their organisations, dissent is silenced. Books are burnt. Anyone who disagrees, even mildly, can find it to be their death.

And I find it a terrible shame that the only way the game gives me to change that is to kill the members of those organisations. At best, I can save a few of them - but as a gamer, I should be able to work out a better path than that. A harder path to walk, yes, but one with greater rewards. 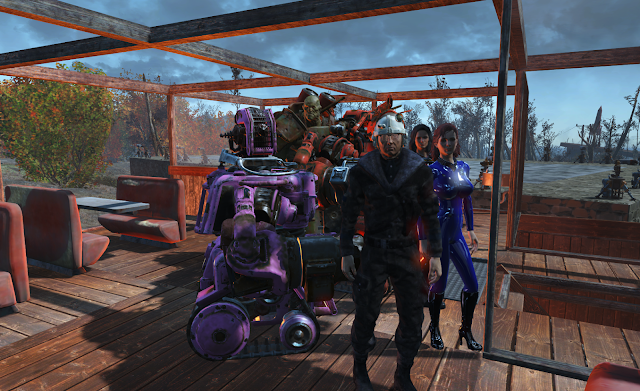 A united Commonwealth, where all sentient life can co-exist, can have a voice, can be free...
Posted by Brett Caton at 13:50