When Feminists say "not all men are cockroaches to be stomped on", I have to wonder why men respond with anything but contempt.

Why do so many men accept their abuse? 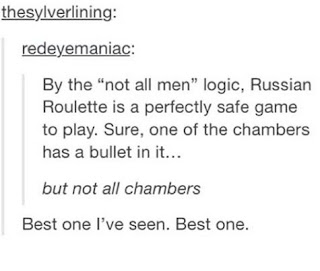 Since women kill women, the author should cower in fear from the rest of humanity.

But what they really mean is that men are the enemy.

They never leave us.


Think about it. If we lived alongside some mad group of monsters, we'd kill or flee. We certainly wouldn't spend our days bitching about it on Tumblr.

Feminists practise doublethink to derive the benefits of creating a panic - without any of the natural responses to real threats.

They are parasites, and they only exist for as long as men and women are fooled by traditionalism into thinking they must be protected too.

We need to reach out to those people and make them understand:


"Feminists are not playing by your rules" 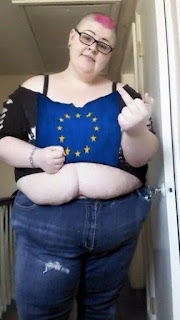 As soon as we collectively say no, they will collapse. They can't work without special treatment, without having all physical tests removed from physical labour, without demanding men carry the goods while they get paid for nothing.

Feminists rely on emotional manipulation to get their servant class to do their work for nothing.

When we say no, as a group - they will have nothing left to say.

And they will disappear into the mists of history.
Posted by Brett Caton at 01:17

Email ThisBlogThis!Share to TwitterShare to FacebookShare to Pinterest
Labels: misandry, not all men