Why do Feminists think the validity of facts depends on the sex of the person discovering them?

A feminist sent me this message on Tumblr today, pretty much out of the blue. I thought it very representative of their mentality. 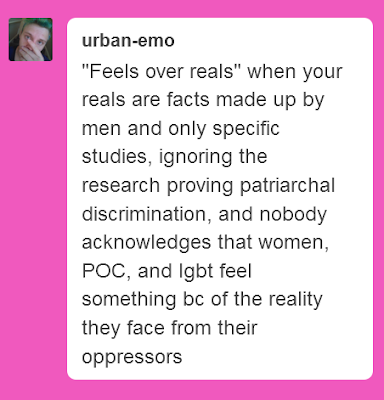 "Feels over reals" when your reals are facts made up by men and only specific studies, ignoring the research proving patriarchal discrimination, and nobody acknowledges that women, POC, and lgbt feel something bc of the reality they face from their oppressors"

There isn't any. Feminist 'research' isn't subjected to the normal academic rigour, let alone the scientific method. A group that practises Listen and Belief simply cannot cope with such testing.

"The facts made up by men"

Facts aren't "made up" at all. You seem to think, like any good SocJus, that reality is subjective. No wonder you think Feminist 'research' is better than that which comes from sceptical evaluation and testing, you simply have no grasp of reality.

" nobody acknowledges that women, POC, and lgbt feel something"

This is truly bizarre. The amount of "acknowledgement" is extraordinary. But there are people "acknowledging" that 9/11 was an inside job and that Carl Sagan was a lizard man sent to fake the moon landing (it actually took place on Pluto, true fact).

Just because you feel something doesn't make it true.

"the reality they face from their oppressors"

You cannot claim to be oppressed when YOU are the one with power over your so-called oppressors, and they have no power over you.
Posted by Brett Caton at 10:59