"You can't say that women have always been equal"

(one thing I noticed reading this article is that Feminist historians keep referring to different periods of history as Golden Ages for Women.

How can all these different centuries throughout time be unique in that they allowed women to work and hold power positions?

Can our histories be trusted when it is being re-written by ideologues to meet whatever 'truth' they want it to be at the time?)

"Honestly it's a problem for both genders, but you can't say that women have always been equal, and there still are problems women face today that are outrageous. And feminism is not about bringing men down, it's about setting a level playing field and getting rid of the problems that both men and women face, like gender roles and stereotypes. There are extremists who go as far as to hate others but when isn't there? I can say a lot more about how feminism is necessary but it's almost midnight and I'm tired." (source)

(UGH, another Feminist who doesn't know how to use whitespace)

"but you can't say that women have always been equal"


I can and do - I say they were different, however. Feminists routinely claim that the evil Patriarchy (i.e. all men, everywhere) conspired to stop women working. This is garbage. Historical documents routinely show women not only working, but ruling, since the dawn of history.

Unless Feminists have Tardises, they simply cannot take the credit for it. Feminism is a recent doctrine and the concept was completely alien to groups such as the suffragettes, and their predecessors, the Suffragists and the Chartists.

So that females are not entitled to any exemption from any thing that appears in the act itself neither must there necessarily be any implied exemption in the statute from any analogy to the exemption of women from serving other offices...

But secondly a woman could not execute in person every part of the of an overseer of the poor she may appoint a deputy may perhaps be objected to this that the power of appointing a deputy is confined to ministerial offices only and this is not of that description..."

In other words, a woman could do all the jobs, and if she was physically unable, she could employ a deputy to do it.

The Feminist version of history uses the period of mass conscription - around WW1 & 2 - where men were told they had to fight for their country, but in return, they could expect jobs to be waiting.

Women were told they wouldn't have to fight, but would have to give the surviving men their jobs in return for their safety.

Was that a bad deal?

The suffragettes were offered a chance at conscription - presumably with the same bargain. They turned it down.

Recently, the US courts have ruled that women are the equal of men
- and so face equal responsibilities.


Feminists have now decided this is the wrong sort of equality in Norway. Feminists in the US are outraged at the very idea.

Treating women like they were lowly men? The nerve of them!

" there still are problems women face today that are outrageous"


Yet I don't see Feminism dealing with them. And they mostly occur in countries where outrageous things happen to men - and Feminism, despite it's claims to ownership of equality, never acts on their behalf.


"feminism is not about bringing men down"


You might want to tell Mary P Koss about that one. And those Feminists in Israel and India who fought and won the battle to keep female rapists from being charged.

And the Feminists who made a new Apartheid, and forced men off buses and trams and trains, so that women and women alone had special treatment, special carriages where they were safe while men were forced into the second class seats and told to learn their place.

I don't care what Feminism SAYS. The Communists said they were just about sharing. The Nazis claimed to be peaceful, fighting defensively, an oppressed class punching up...

I care what Feminism DOES.

Feminism actively harms men and boys. When that changes, let me know.

"There are extremists who go as far as to hate others "

... and they were appointed to leadership positions by people like you, who are happy to enable their dirty work and let yourself think your hands are clean.

How Feminism harms children and men:

Feminism demands all sex be State-controlled: 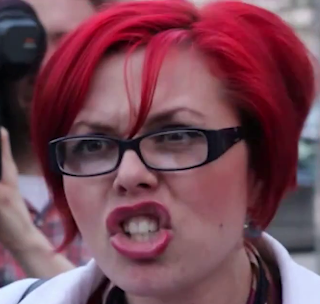 Feminism is a hate movement.

And yeah, I'm well aware you Feminists aren't going to read any of these links - the evidence that contradicts your dogma has been available for decades - it's emotion that you're running on, not reason, which is why the other disputants always leapt to emotional attacks rather than disputing my points with evidence.

But you lot aren't the only ones who see this page. It's open to the public. How do you imagine it looks to outsiders when any dissent is met with a torrent of abuse? When reasoned arguments are unknown to your side?

Your group controls the West, by and large, and I expect it will for decades - but every day, more and more will be pushed into our quarter.

It might take a day when a black man is told by a white woman that he can't ride the bus because he's born wrong.

Or it might take having a son arrested when he's done nothing wrong.

But every little bit of harm adds up. Resistance is growing.

And I think we'll win, in the end.

From "Suffragettes can't save feminism":

...One such example is a recently discovered document listing English women voters in an election which took place in 1843, 75 years prior to legislation recognizing women's voting rights in 1918. At that time, suffrage for men was not universal, but limited to the upper classes, with various groups agitating for parliamentary reform throughout the 19th and early 20th centuries.

The women recorded in the 1843 document would have had to meet the standards met by men. They paid a fee, and it determined how their vote was counted. Note that the article mentions that the high fee paid by Grace Brown gave her 4 votes, where those who paid less got only one vote. These women also enjoyed a privilege denied to men who did not meet legal voting requirements. Adult men who were not heads of households could not vote.

Prior to the formation of the United States, voting in the colonies was largely governed by the same standards used in England. However, contrary to popular belief, women were not universally barred from voting.

As with the women in England's 1843 document, American women who voted prior to the 20th century did so under the same terms and conditions faced by men, save for one: Women were not and still are not subject to being drafted into the military in times of war.

One interesting example of early female voters prior to universal male suffrage is the colony of New Jersey, where gender was not a factor in voting rights until the Democratic-Republican party, which eventually became the Democrat party, took the vote away from Jersey women, minorities, non-citizens, and the poor in 1807 over conflict between their party and federalists.

Even after the U.S. became a nation, men's suffrage was not universal. Voting rights continued to evolve throughout the 19th century, with states slowly letting go of property ownership requirements over the course of decades.

After the 15th amendment was ratified, recognizing black male citizenship and voting rights, southern states passed "grandfather clauses" to roll back their rights, and used Jim Crow laws and poll taxes to get out of recognizing them until the success of the civil rights movement in the mid 20th century. This allowed wealthy and middle class white women to vote while many poor and minority men and women were kept away from the polls.

In 1876, the supreme court ruled that Native Americans were not citizens as defined by the 14th Amendment, and therefore could not vote. In 1890, they were told they could apply to become naturalized citizens in their own ancestral land. Laws denying citizenship to various Asian immigrants passed in 1882 (the Chinese exception) and 1922 (Japanese immigrants.)

In 1919 Native Americans and in 1925 Filipinos were told they could earn citizenship by risking their lives serving in American wars.

Various stipulations, including Jim Crow laws and poll taxes, left the majority of the indigenous population of the U.S. and its territories, along with the majority of Asian immigrants, and most minorities, subject to the rule of the American government without representation by officials for (or against) whom they had the right to vote - the same injustice that sparked the Revolutionary war. Asians did not see their voting rights universally recognized until the McCarran-Walter Act of 1952.

Native Americans' right to vote was not fully recognized until 1957, 37 years after the 19th Amendment recognized women's right to vote... 12 years before the first man walked on the moon.

It was not until 8 years after Native Americans were recognized, 4 years after the first manned American space flight and 4 years before we put a man on the moon, that the Voting Rights Act passed, protecting the right of all blacks and other minorities to vote.

Upper class white women got the vote in 1920.

Impoverished black men and women did not truly get theirs until 1965.


European Queens Waged More Wars Than Kings, despite the claims by Feminists that all violence is masculine in nature.

Feminists call for a new Holocaust

So @x_Aeon_x has been suspended for anti-feminism.
But here are some of the things @twitter is OK with. #RIPTwitter pic.twitter.com/Pkk3AYvfSS
— ♂=♀ (@manumiss1on) April 28, 2016