Feminists don’t want to join your club, they want to destroy it.

Alice Arnold, Guardian writer says: "I won’t play where I’m thought of as second class", which I think we can all agree is very unfortunate, considering second class humanity would be such a leap for her to achieve.

Her argument is that a male only club must, by definition, despise her as a second class citizen.

It claims itself to be “a gentleman’s club where golf is played” she states, without a moment's comprehension.

So it's a club for men - and they entertain themselves in various ways. She never presents a coherent argument why it's perfectly fine for white women to deny black men access to their clubs, but black men must allow her to sit on any of their conversations and make sure they aren't plotting against all women everywhere - i.e.,

"Another argument put forward by the “no” campaign is that not many women would want to join. Spot on. I do not want to join your [censored] club. "


(I apologise for her strong language, but you know what these Feminist cunts are like).
But wait! There's more! The Guardian isn't done being cunts, not by a long shot.
Muirfield golf club has lost the right to host the prestigious Open championship after Feminists like Laura had the malescum crushed for the heretical desire to have spaces where they aren't being policed by her basijis.

The club was confused - they had heard the Feminist rhetoric about equality and thought that the previous definition - the one used in English, and not Feminism - still applied

“Why shouldn’t men be allowed their own space, when women have women-only gym and swimming sessions? Isn’t that sexist?”

Of course it is. The belief that women are intrinsically better than men is diametrically opposed to the ideas of the mainstream second wave Feminists, who marched arm in arm with husbands, sons and fathers, who thought they were making a better world for everyone, not setting up a new Apartheid.

" You want to know why we have women-only gym and swimming sessions? It’s not some shiny, special privilege bestowed on us lucky women because we just deserve nice things." 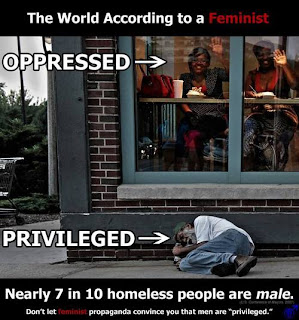 Liar! Feminists love privilege - they use "gynocentricism" - the centring of everything around women - to make sure all resources are spent on them, and none on men. In education, in health care, in transport, they enjoy privileges exactly as the White class in Apartheid era South Africa did.


"It is a direct result of the male harassment, sexism and sexual violence that has driven a quarter of women to give up exercising outside altogether"

A quarter of women?

Fascinating. There's around 3,562,500,000 women. Apparently, during The Golden Age, it was safe to be outside, but now thanks to the nightmare of sudden Patriarchy, 890,625,000 of them are quivering indoors.

There's no reference for any of this. The likelihood is she's looking at the women she knows, who are all getting rather pudgy, and had decided that they couldn't be responsible for it, oh no, it must be Gamergate or MRAs or the rampaging hordes of Old White Men forming rape-gangs ....

No. It's not the evil men making you fat, Feminists. It's you.


Rape gangs? Oh right, it's not the right sort of men who actually do do that, Feminists can't deal with them...

Almost everyone has a recording device on them at all times - yet there's no evidence of this rabid murder-spree occurring outside the Feminist imagination.


Where's the evidence to support their feelings? Is the argument that it is true because it feels true a sane one?


They are claiming that violence against women is increasing enormously in the West - despite no crime statistics, despite more money being spent on their care than is spent on men by far, despite the much longer lives women lead, despite every rational and reasonable voice in the world contradicting their hysteria...

The doublethink it requires to hold this position must exhaust the brains of these modern Feminists, which is why they seem so bloody stupid when compared to those who came before. I can't imagine CH Sommers refusing to do weights because some man might look at her with yearning.
Posted by Brett Caton at 02:58