Why do I see Feminism as a Hate Movement? 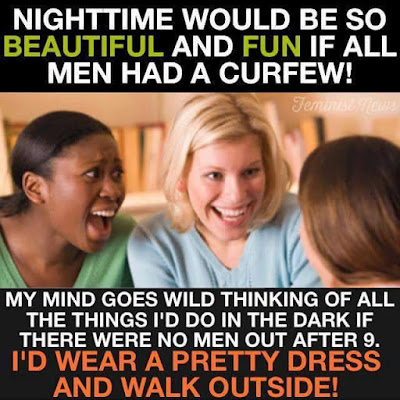 This is one of the many images it creates as propaganda. First it whips up a fear of men - then it offers a solution. "All we have to do is lock them up - put them in ghettos! Take away their rights! Then we can be safe!"

We have heard this before. This was done to the Jews, because the Jews were seen as unsafe. But the fear was whipped up further - finally the only solution was to eliminate them entirely.

But here's the thing - lets follow the logic through. Imagine all the men are inside from the hours of 9pm to say 8am - they are allowed out to work for women for a while, then kept indoors so women are safe.

Because that would make women safe - there are no violent women, no criminal women, no women who rape or steal... Feminists believe this when it's convenient to believe it - despite the many counter-examples. They care nothing for facts, it's always about the feelz.

But what would happen in their fascist utopia? Well, the place would burn.

Woman who failed FDNY physical test 6 times gets another chance


Well, ok - maybe they are lucky and not everyone is torched - but plagues would hit the survivors because men do almost all the sewage work, men do the plumbing, men do the medical work above the level of doctor, men maintain the power lines that supply water pumps with pressure and the power plants themselves.

Now, Feminists at the top know this, in the same way the Nazis in charge knew the Jews weren't doing anything except existing. Feminists never move and form their own nation, like other groups always have in the situation they claim to be in. They never Separate.

They just try and shame men into submission, and rejoice in their female supremacist hatespeech, and then turn around and say

"why are you against equality? why do you hate women?"


whenever you point to posters like this and how fucked up they are for a so-called equality movement.


What would happen if no men showed up for work today?