Bert Williams. A black man doing blackface. I wonder what he thought of it all?

What is blackface? A caricature used in entertainment. Usually involves singing. Sure, the people are shown as buffoons, but that’s done of every ethnic grouping.

Even to poor kittens, alas. Always being stereotyped.

I’m Australian, and if you want to dress up as a silly caricature of my nation, I don’t care. Knock yourself out.


Preferably with the Adelaide ‘96, a smashing white wine with an lovely afterburn coming and going.

The thing is, it’s only racist if you genuinely believe that certain people are inferior on the basis of race.

Did Tim genuinely believe South Africans looked or acted like that?

Of course not. It’s a joke. It’s funny because it’s in bad taste.

When Snoop Dog does ‘white guy’, no-one gets offended. It’s a joke. We get it. There’s no malice.

A caricature of a popular celebrity? Oh no! How terrible!

This skit is geoblocked here, but it looks funny. Key & Peele In a sketch called "Das Negros" where two Black men are hiding from the Nazis--disguised as white Germans.


Seriously, the way to disempower things like blackface is to do blackface. Or whiteface, or yellowface, or Avatar-blue-face - it doesn’t matter.

By disconnecting the malice from the situation, by desensitising rather than the SocJus super-sensitising process... you change it from something that genuinely hurt people to a quaint reflection of a time that has passed.


When I hear jokes about Australians being convicts, i don’t find them funny, not because they insult my ancestors, but because that lacks wit. Genuinely looking into the absurdity of the time makes for good humour.

This is the sort of thing that was done to my ancestors. They would be put into masks designed to dehumanise them, and not allowed to speak to other prisoners. How that was supposed to make them better human beings I shall never understand.

But it’s funny too - because it is so fucking over the top.

Look at the size of those chains! Push that a bit further, make it caricature, and you have an excellent costume. 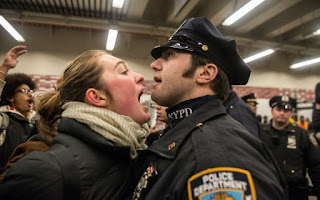 The reason this officer can endure the naked aggression of this woman is because he has had an officer shouting at him. He learned how to cope in a less dangerous situation and can now deal with her without taking his pistol and removing her brain from her skull, like most people would.

Here we have desensitisation training for someone afraid of spiders. (source)

Note: this is the exact opposite of how SoJus manages things, with it's trigger warnings and 'microaggressions' and 'safespace'.

And here we have the outcome. The phobia is gone. Until she visits Australia and something that size but venomous and aggressive spots her from across the room and runs her down like... but enough of my childhood...

We don't live in an era where white people are roaming about, looking to lynch a black man for touching a white woman. Black people have no sane reason to fear white people. If anything, in the US, black people should fear black people. Black on black violence is terrible, but it seems largely ignored.

The direction SocJus has taken instead is to make people neurotics, rather than helping them - to create a blind phobia, a fear and hatred of my kind.

The fact that many of them are white men themselves doesn't stop them in the slightest - these masters of doublethink imagine they are the exceptions to their rule, or that by punishing other white people, they eradicate the Original Sin of their birth.

Self-loathing flagellators are nothing new.
Posted by Brett Caton at 20:47