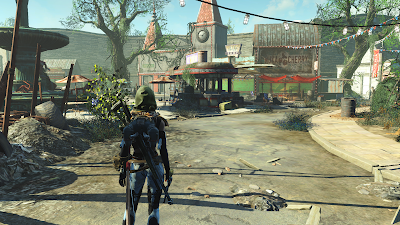 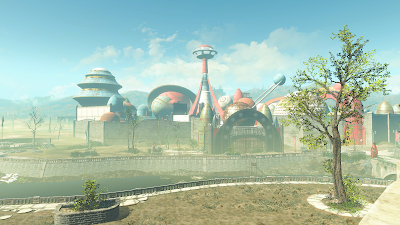 
Well, I went through Nuka World.  I loved the scenery, and the funhouse especially.

I found the story about the quest to save people from turning into ferals enjoyable and moving - but found it frustrating that i couldn't mention being the leader of the Minutemen, that I had a settlement of ghouls, and was friends with GoodNeighbour who would have loved to have known of a solution, and all of them would have funded research.

Heck, I wanted to make Oswald live on an island with his ferals, and only deal with him via electronics, in case it was his presence that was turning them. That would have been a twist!


But you don't get any of those choices - i guess the voice acting limitation won again.

Well, what about with the raiders? Are they reformable? Well, one tribe was, in an earlier game, but the three here just seem to be evil. The Disciples just seemed to be the worst, the Operators to have potential. But changing them is not an option.


Heck, changing Gage isn't either. In fact, he telepathically knows as soon as you kill one of the mob bosses, regardless of the fact I used the Sandman kill in the middle of the night.

All the raiders knew. Being stealthy or persuasive is out - it's time to slaughter until the streets run red.


I stumbled over Gage, who went from practically professing his love for me to insta-hate.

Hey, why was he loyal to the raiders, who made it clear they were going to kill him if his plan to have me as the new overboss failed?

Why wasn't there an option for him to walk in exile, or even be recruited as an agent for the Commonwealth? Worse men than him have served as agents of the crown.

There's beautiful artwork in Fallout, I love constructing settlements (especially modded) - but argh, it really disappoints me as a game. 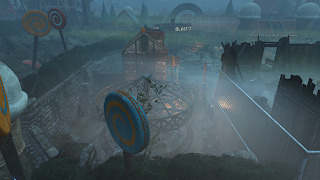 I dunno, maybe they should just sell the construction game separately from the shoot-em-up!


I loot the bodies. Can I turn the place into a settlement at least?

Nope, not an option.

The traders inform me they'll be running the place for themselves, without joining the Minutemen even, despite remaining helpless; despite being ripe for the next group of thugs to take over.

So what was their big plan? The Raiders were going to take over the Commonwealth?

It was never going to happen.

The BoS have air power - they could have dropped nukes on raider towns from the sky, and every settlement would have turned to swear fealty to them if the Minutemen failed to protect them.

And the Institute - well, the raiders didn't seem to even be aware of them.

The neurological weapons the raiders had - the persuasion gas, for example - wouldn't have worked on synths, but would have been refined even further by a hi-tech organisation that specialised in biochemistry. The Institute could have teleported them in everywhere they wanted...


The Raiders were only good at pillaging weak groups, making them weaker, making them die, in a world where humanity was already struggling.

They might have caused the Commonwealth to implode, before they died out themselves at the hands of their many enemies. Which included themselves, they turned on each other very quickly.

So what did I think of it as a DLC? It was okay. I had a season pass, which did the job. I think if you wanted to play as an evil character, and had this right from the start, then it would be good value. 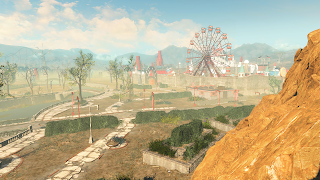 I found Automatron to be more engaging, and it had a little more choice involved as well - I'd have to rate it as the best DLC, followed by Far Harbour.

I prefer playing as the hero, because, well, evil's just ... mundane I guess. But that's my taste. If you want to let the darker side of your nature rip - this is the one for you!
Posted by Brett Caton at 04:07