This is how CNN reports the news.

This is how CNN reports the news. Well, I guess that's better than ABC/SBS, who just suppressed it entirely.

Let's break it down.

They blame the victim. He 'provoked' them. He shouldn't have worn that dress. They couldn't help themselves! He was ASKING for it.

They focus on imagined right wing 'Nazis', rather than the people who are openly bashing and burning, who have sent people to hospital, who call for Revolution.

They don't care about the fact these thugs have declared war on the democracy of the United States - not hyperbole, btw, that is what they have said.

They don't care that people like Sarah Silverman and Debra Messing are openly calling for a violent revolution.

They want all the focus to be on their ideological enemies - the 'Nazis', i.e. the people who defend free speech, the people who think differently to them; the gay people, the people in interracial relationships, the people with mixed ancestry, the jewish people.

And if the violence escalates as a result? If the people being bashed fight back, rather than being smashed into the ground?

They will use that as proof that they are Nazis, and whip up the mob to bloody ends

Did the Mayor order the police to do nothing in order to protect antifa? Finally out of the hospital post-Berkeley riot. Concussion and vision problems from being maced by Blackbloc. Husband had it much worse :(
— S. Misanthrope (@SMisanthrope) February 3, 2017 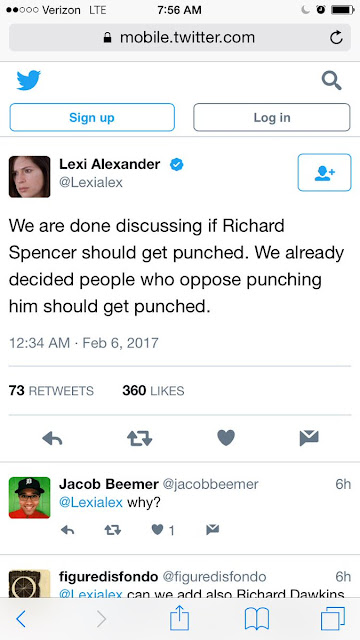