"Six Misogynistic Messages From The Orville"
Misogyny means the hatred of women and girls - it's incredibly rare. Even cultures that are oppressive by our understanding do so in the name of protecting those people.
"Mediocre Men Are Better Than Talented Women"
Are you kidding me?
"Ed Mercer’s career is on the rocks"
Yup. He went through a bad spell following his wife's infidelity - it happens. He recovered. He has consistently shown he has excellent aptitude for his position.
"been insubordinate"
So have the women? It's comedy. Everyone is behaving somewhat unrealistically when it calls for it.

Kelly broke the rules so badly it looked like she might have gotten hundreds of thousands killed in painful ways. We get a happy ending - but we easily could have had it end in a nuclear inferno, or a jihad.
"He proceeds to do a mediocre job at best"
Are you ... have you actually watched the show? He boarded a Krill vessel, and took control of it with the assistance of one other officer. As boarding party actions go, that was it; the perfect score.
" She is everything he isn’t: professional, commanding, and cool under fire."
Which is why she is pissy at Isaac and violates the rules to wander off and look around and accidentally start a fanatical religion amongst a people that could have ended up just like the Krill, but with better technology.
"her name should still be ahead of an officer with a history of being intoxicated at work"
This isn't an office! This is a command. You don't get the top seat because you are the 'correct' sex, race, or species, you get it because you earn it, and as dumb as some of the things he does, at other time he does brilliant things, and he listens to the advice of his officers, and acts as a good mentor when he can. He is a very good captain. We never see her in command like that.
" none of them are white men"
Oh dear lord, the author is a racist. They'll start ranting about the Jews any minute now.
Kitan freaked out in her first command. She's got potential but she's very green. Bortus has no social skills. I can't see him commanding humans. The Doctor has never displayed any ability at command, let alone interest in it. How would she cope with ordering others into a situation where they will die for the good of the Union?
But none of that matters to the author, because white men are baaaaaad!
"Grayson’s superior should have refused outright."
Why? Mercer clearly had a good record, she vouched for him, they were willing to give him a chance, he has proven his worth even if he's not perfect.
"When someone shows they can’t handle responsibility, you don’t give them a second chance"
Welp, then Kelly is out forever, she'll never be a captain. And Kitan? Would be drummed out in disgrace, or facing charges. She violated rules left right and centre when she used the protocol to override the Captain.
Mercer gave her a second chance because he is a good captain, and the author hates it because they hate men, and white people, and a white man is instant scum in their eyes.
"In real life, women are often passed over for professional opportunities"
So are men. But this isn't real life. The author wants to talk about unrelated matters - they have a hobby horse they want to ride.
"The same is true for people of color "
... which is why asians are the richest demographic?


What an appalling euphemism. "people of color ". Remember when TOS made fun of that?
"Strong Women Are Scary"
Yes. Strong Robots are scary too. Having someone who could kill you with a slap during an argument is scary. She can punch through a bank vault wall. In fact, it's hard to see how she avoids *accidentally* killing people.
"raise your hand if you’ve ever seen this trope applied to a man"
I don't care. Most of the times in fiction super powered people are handled unrealistically. Orville derives part of it's uniqueness by exploring the consequences of such things. Superman would have killed Lois Lane during sex; Larry Niven pointed that decades ago. Which the author would know if they weren't a racist, sexist bigot. 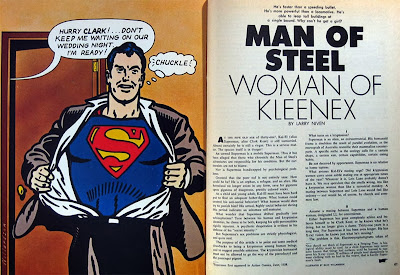 " we can look forward to an episode were Kitan has to prove how feminine she is"
She gets guys. She lost one guy because he was worried about her strength. One. I don't think she's lacking for action.

And it's not her lack of femininity that's the issue, it's the whole "death by snu-snu" ..."The spirit is willing but the flesh is spongey and bruised"!

" many of Finn’s scenes are ruined by a slime ball named Yaphit"
Rubbish, she plays the straight man to his whacky character. Then the roles are reversed in the pheromone episode.

And Yaphit is always genuine in his approaches, and has a last pitch where he puts his all into it, and makes it clear he will stop at that point if it fails.
But the author clearly feels that men should never approach women at all. I have to wonder how long a colony of such people would survive until they changed that rule, because unless men approach women, there's not going to be a lot of babies.
" You don’t need a degree in feminist theory "
Yes, good point, no-one does.
" these scenes are played for laughs"
In a comedy. God, who knew? Jokes? What even are they?
" it’s still incredibly gross to write a story about a woman being forced into sex with a man"
This never happened. The pheromones episode is about what it would be like if human pheromones were ramped up to eleven. You know humans are influenced by the smell of other humans, right, author? I mean - you have experienced sexual desire?
No?
Not even once?
"Cheating Justifies Abuse"
Oh what garbage, Ed is not abusive, he's angry. Men are allowed to get angry. Many women have said they were angry at Kelly's behaviour as well.
"Malloy is constantly acting in ways unbecoming of an officer"
In a comedy. Has this person never watched an episode of MASH?

"Malloy is a vehicle for the show’s Family Guy-style humor"
This is an example of Ad Hominem. The author hates Family Guy; Seth made Family Guy; therefore this must be bad *by association*.
Nope, doesn't work that way. The author is sexist, racist, and a lousy critic of film and television to boot. Are they trying to rack up some sort of high score?
"Mercer is a candied protagonist"
The dude has a permanent black mark on his record. We have seen him almost single handedly take over a Krill vessel, and defeat another one through superior tactics. We - those of us who actually watch the show instead of sneering endlessly - know he's actually pretty amazing on a good day.
"Rape Is Funny"

So is murder. We joke about everything. Those of us with functional senses of humours do, anyway.
In states like in Hitler's Germany, they punish you severely for telling certain jokes. I have the feeling the author would be right at home as the judge for such trials.
"The Orville’s first season isn’t great"
Says the person who has achieved nothing but spitting on others. Oh, what's that? It's been renewed? IMDB has it's popularity rising? Rotten Tomatoes gives it 93%?
Yeah. I think The Orville has made Seth even more successful, and the critic here just can't stand it. I expect to hear that their bloated corpse will be found in front of the television, with nothing but empty tubs of ice-cream filled with their tears.

And now, I'll end this article with a rape joke that the author reminded me of...
Posted by Brett Caton at 23:31